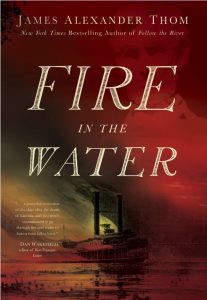 Early in the Civil War, when Abraham Lincoln shook Paddy Quinn’s hand, grinned and winked at him, the war correspondent felt as if he’d been given a medal. At the end of the war, “Father Abraham” lies dead by an assassin’s bullet, but Quinn’s writing hand still feels that grip, “like warm iron,” pulling him. He gets himself assigned to cover the President’s burial in Springfield, Illinois for Harper’s Weekly, and boards the doomed steamboat Sultana to go up river and write Lincoln’s elegy.

Private Robbie Macombie, a deathly sick prisoner of war, always felt that he was soldiering not for “the Union,” but for Abe Lincoln, who grew up just like him laboring in hardscrabble frontier Indiana. That sense of kinship makes him want to go to the funeral more than home, if he can stay alive long enough. 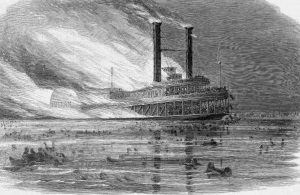 And so the two war-addled men, each one’s strengths balancing the other’s weaknesses, join like converging rivers in a life-current strong enough to carry them through the sudden horror of the worst maritime disaster in American history.

Both learn, as desperate men do, that Fate has wiser plans for them than their own. 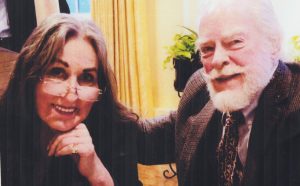